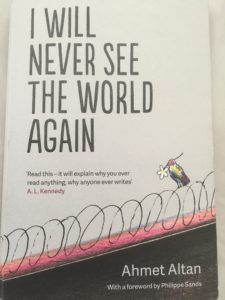 This is a book which celebrates the power of imagination.

The saving power of imagination.

We follow Ahmet Altan, Turkish novelist (still in jail as I write), from the day he was arrested in September 2016 by the Turkish authorities for allegedly supporting the putchists of the failed coup in July 2016. We follow him body and mind. Right after his arrest, a policeman offers him a cigarette, he refuses and says : « I only smoke when I am nervous. »

His reply is totally unexpected (to him). It has the power to transform the situation he is in. It stops the circumstances from crushing him down. Extract :

«  Who knows where this sentence came from…

On one side of this reality was a body made of flesh, bone, blood, muscle and nerve that was trapped. On the other side was a mind that did not care about that body and made fun of what would happen to it, a mind that look from above at what was happening and at what was yet to happen, that believed itself untouchable and that was, therefore, untouchable. »

All along, we follow him through the arcade of a farcical justice system and of his imprisonment. We witness how he creates a space in his mind and in his heart where words can exist and can take him to places he misses so much. A space that is maybe more a state that no one can take away from him : a freedom to feel, think, remember and write.

Ahmet Altan is still in jail. He was released in November 2019 just to be arrested again a week later and condemned to life imprisonment.

« I will never see the world again ». Ahmet Altan.